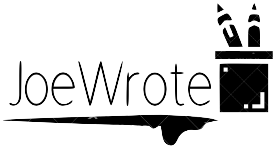 This week marks the one hundred and fourth anniversary of the 1916 Easter Rising. Also known as the Easter Uprising, the week-long attempt to oust the English from Ireland through armed conflict is one of the most pivotal events in Irish history. While the rebellion was crushed, it greatly bolstered Irish nationalist sentiment, ultimately leading to the War of Independence and the establishment of the modern Republic of Ireland.

As the U.K.’s exit from the European Union and Sinn Fein’s historic performance in this spring’s election have reemphasized the question of Ireland’s reunification, it is necessary to understand how the Easter Rising of 1916 set the stage for Ireland’s future.

A Week 800 Years in the Making

English occupation of Ireland began with the 12th century Anglo-Norman invasion. As it tends to do, colonization led to immense strife and conflict. Seeing Ireland as nothing more than a source of expendable resources, the English spent the next 800 years treating the island and its inhabitants like a soaked sponge, wringing it dry to water English soil. During the most infamous offense, the Great Hunger (known stateside as “The Irish Potato Famine”), the British employed mass-starvation to kill off the Irish, leaving their land free for the taking. Understandably, the Irish didn’t take kindly to colonization or the atrocities that accompanied it. Between the onset of English rule and the 1916 Rising, there were at least eighteen unsuccessful armed rebellions noteworthy enough to have made the pages of history. Rebellion was a common occurrence in Irish history, but there was a specific intersection of factors that led to another attempt in 1916.

First was the disillusionment with non-violent political methods. In the decades prior to 1916, the Home Rule Movement, which sought to achieve Ireland’s right to self-governance through participation in Britain’s parliament, was the predominant mechanism of Irish nationalism. But as “Home Rule” bills continued to fail, many came to see politics as an ineffective means of securing Irish self-governance. 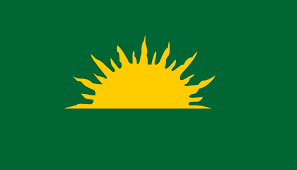 Second was the establishment of Irish nationalist paramilitary organizations. In the years prior to the Easter Rising, Irish Catholics had formed several armed groups to defend themselves from the Ulster Volunteers (UVF), a unionist, Protestant paramilitary group that used violence to combat the rise of Irish nationalism. The Irish Citizen Army, the Irish Republican Brotherhood (IRB), the Irish Volunteers, and the all-women Cumann na mBan were nationalist paramilitary organizations formed prior to 1916. Armed with rifles and a hankering for independence, it was only a matter of time before these groups took militant action.

The third reason an attempt at independence was made in 1916 was World War I. With Britain’s military focused on Germany, the leaders of the Rising figured there would be less troops and resources to fight in Ireland. In addition to a distracted British military, the Crown’s war-time propaganda had thoroughly indoctrinated the Irish people with “the rights of small nations.” This notion, which claimed a nation’s right to independence was not contingent on its land or population size, was Britain’s justification for entering the war. Seeing themselves as a small nation, Irish nationalists agreed with the Crown’s philosophy: if the English were compelled to fight for Belgium, then the Irish were compelled to fight for Ireland.

Planning for an uprising started as soon as Britain declared war on Germany in 1914, but action was delayed until 1916 when the IRB convinced the Germany to send rifles and ammunition for use in the Rising. When the German ship carrying the armament was intercepted by the Royal Navy, the leaders of the IRB feared a British crackdown and rushed into action. On Easter Sunday, 1916, the IRB Military Council voted for war, elected Patrick Pearse commander-in-chief of the Irish Republic, and issued attack orders for the following day. 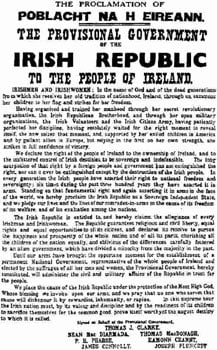 On Monday, April 24th, 1916, 1,200 soldiers from the Irish Volunteers and the Irish Citizen Army seized key installations around Dublin, most notably the General Post Office (GPO). It was here, on the steps of the GPO, that Patrick Pearse read the Proclamation of the Irish Republic. Declaring Ireland an independent nation, the Proclamation affirmed “the right of the people of Ireland to the ownership of Ireland and to the unfettered control of Irish destinies.” (For those more familiar with American history, imagine George Washington reading the Declaration of Independence aloud as British troops marched into Lexington.)

Following the triumph of the first day, the rebel’s military inexperience sealed the Easter Rising’s fate as yet-another unsuccessful Irish rebellion. The rebels failed to capture the lightly-guarded Dublin Castle, which housed the most senior British politicians in Ireland. Had the Castle and its occupants been captured, the rebels would have had the upper hand in negotiating with the Crown. Additionally, conflicting orders from the IRB’s officers prevented the Rising from reaching the rest of Ireland, allowing the English military to focus solely on the capitol. And finally, inspired by the style of warfare taking place on the battlefields of Europe, the rebels elected to fight a defensive war. They erected barricades, dug trenches, and waited for the English.

Unburdened by additional conflicts around the island, the might of the British military was concentrated on the rebel forces in Dublin. Artillery, armored cars, and machine guns were let loose on the city with little concern for civilian casualties. While trenches and barricades were effective in the open fields of France, in downtown Dublin the British simply shot down on defenders from the surrounding rooftops. On Saturday, seeing little reason to continue fighting, Patrick Pearse issued an unconditional surrender, hoping to spare the lives of both Dubliners and his troops. When the dust settled, sixty-six rebels lay dead, along with one hundred and forty three British soldiers and over two-hundred and fifty civilians.

Aftermath and the Lead Up to the War of Independence

If judged for its military accomplishment, the Easter Rising of 1916 undoubtedly deserves a chapter in the book of failed Irish revolutions. However, as the Easter Rising was not the culmination of a story, but rather the prologue to the Irish War of Independence, to deem the Easter Rising failed at advancing its objective of Irish self-governance is gravely inaccurate.

While the rebels made mistakes on the battlefield, the English outdid them in the aftermath. Instead of extinguishing the nationalist flame, the English poured gasoline on it. Following Patrick Pearse’s surrender, over 3,500 Irish men and women — far more than could have possibly taken place in the fighting — were detained. In a flagrant violation of both British and international law, English officers who had fought the rebels held closed-door trials without representation for the accused. Ninety death sentences were handed down. Between May 3rd — the day after the trials — and May 12th, fifteen Irish nationalists (some who were not even present at the Rising) were executed by firing squad at Kilmainham Gaol. 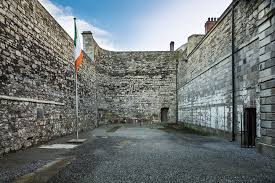 With each volley of gunfire, Ireland’s sympathy for the condemned, and their Republican cause, grew. Noticing the massive backlash of the executions, the British halted the executions, but the damage was done. The executions, coupled with accounts of British atrocities committed during the Rising, had turned the once manageable flame of Irish nationalism into an island-wide wildfire. By the time the last execution took place in August (bringing the count executed men to sixteen), full-blown revolution was inevitable. Over the next two years, those who had been imprisoned following the Rising were released. Additionally, veterans of the Great War, who had just risked life and limb for the “right of small nations”, returned to Ireland. Rife with the nationalist thought, both groups were eager to take up arms for their cause.

The Irish War for Independence lasted from January 1919 until July 1921. The Anglo-Irish Treaty ended the war with the partition of Ireland; the twenty-six counties of the south were formed into the Irish Free State (now the Republic of Ireland), while the six counties of the north remained under British dominion, which they still do today.

Reality endorses a united Ireland. The Good Friday Agreement, which ended the sectarian warfare of The Troubles, calls for the reunification of Ireland upon a majority vote in Northern Ireland. With a rapidly increasing Catholic population and discontent with the United Kingdom’s departure from the E.U., once-immovable polls have begun to creep towards reunification. And with Sinn Fein’s recent political gains in the Republic, a united Ireland looks less like a fantasy and more like a graspable reality. 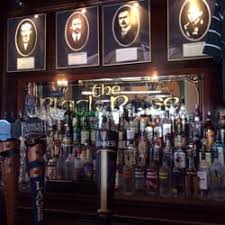 Even though their strategy of facing the British in a sole winner-take-all battle was ill-conceived, the leaders of the Easter Rising achieved their ultimate objective of advancing the cause of Irish independence. While revolutionary thought and action pre-dated the Easter Rising, the seeds of Irish independence were planted the very moment Patrick Pearse read aloud the Proclamation of Ireland on the steps of the GPO. Since then, the people of Ireland have persevered through unspeakable oppressions to water, nurture, and cultivate those seeds. As demographic patterns and political developments continue to indicate its likelihood, one can envision that the blooming flower of a free and unified Ireland is not far off.